Is that a hamburger or a ceramic masterpiece?

Home  /  Trials and Tribulations   /  Is that a hamburger or a ceramic masterpiece? 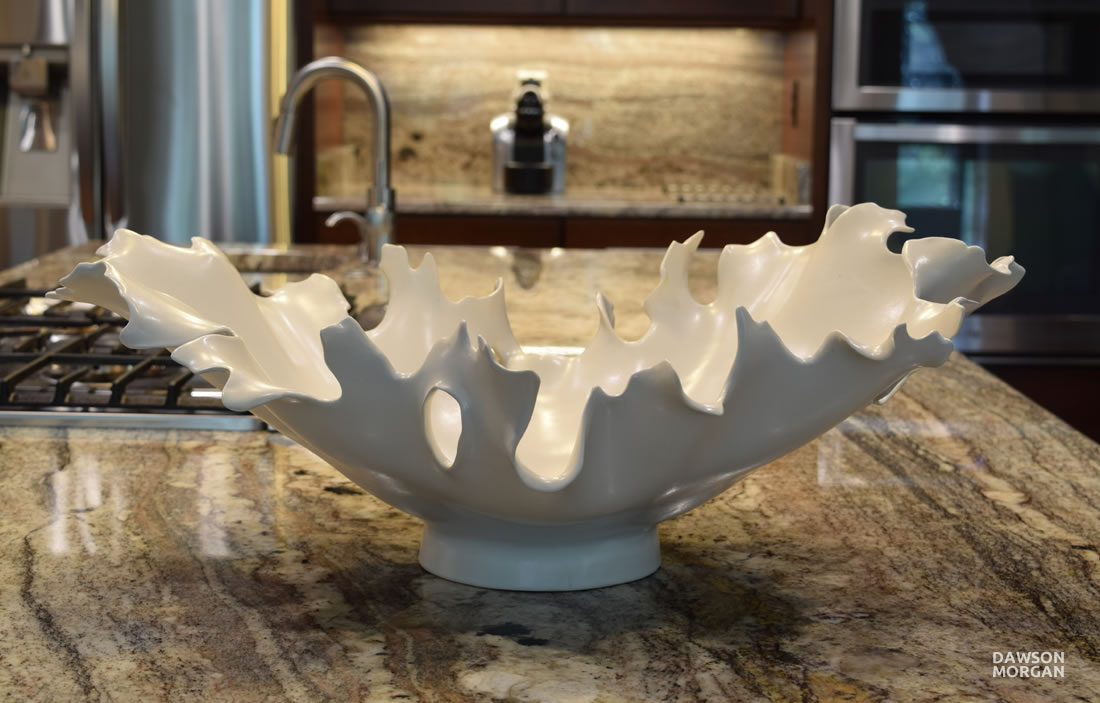 Is that a hamburger or a ceramic masterpiece?

The whole interview went a little wonky.  You really just don’t know what the TV host will say or what direction he or she will take the artistic conversation.  It is sort of like Face Book where you post your sweetest anniversary picture ever then someone comments on your shoes.  Then the entire thread moves to footwear, flip flops and your husband’s long toes.

The opportunity to help promote the Art Fair at Queeny Park fell in my lap.  Greater Saint Louis Artist’s Association did a fabulous job getting media exposure for the fair by having different artists, artwork, and demonstrations on local TV stations.  When the PR exec proposed that I do a demo live in less than three minutes I said, “Sure, of course I can do that”.  So I was scheduled as a guest for Fox 2 morning news. Then reality set in.  Hand built clay is a slow, patient process.  There was nothing I could produce in such a short amount of time. What was I thinking?  How was I ever going to make anything worthy of my pedigree as an artist?  Oh no, what have I done???

After practicing with a few techniques and ideas I decided to focus on one small step of marbling clay for “Vessel Sinks”.  I also arrived at the station early with white and brown clay prepared to be wedged or kneaded like bread dough. I had requested a stable surface or table for the demonstration. After waiting in the lobby for 20 minutes they then rushed us down the hall to a studio set.  Complete hurry up and wait then run situation.  I had eight minutes until my live spot.  There was no table, there was nothing but TV monitors as a back drop.  I’m like, “errr, ummm, I can’t do this without a surface to work on.” The camera guy is now counting down until I’m on. “Three minutes…”  I’m standing there holding 20 pounds of clay stressing out like a new mother, stricken by all the commotion around me.  About 20 seconds before the LIVE shoot a table appears and a very vivacious TV host. Count down, “IN 10, 9, 8…” Right before it was on she looks at me and says, “Why I thought you would be a guy, Dawson”.  Say what?

I’ll let you watch the clip at the end.  The interview went right down the path from celebrating a marriage to flip flops and toes. I had an entire sheet of talking points; after all I was there to promote the Art Fair at Queeny Park. It seemed the hostess was full blown ADD and simply had other things to discuss. I was on task.  Demonstrate.  Make talking points!  Well that was not going to happen. Realizing this is live TEEE VEEE and I can’t take it back. I just went with it, even had fun with all that strange adrenaline/confusion surging through my brain.  Laughing with the moment, I truly enjoyed the experience.

Leaving the TV studio I was still elated, but very concerned that GSLAA would not fully appreciate my, “Hamburger moment”. I got to say half of one of the practiced talking points. Turns out they loved it, said that it was memorable and fun.  Patrons spoke to me like we were old friends having participated through their televisions.  Walking up to my booth they asked me, “is that the hamburger sink?”  Not exactly the image I was after, but “yes, yes it is”. 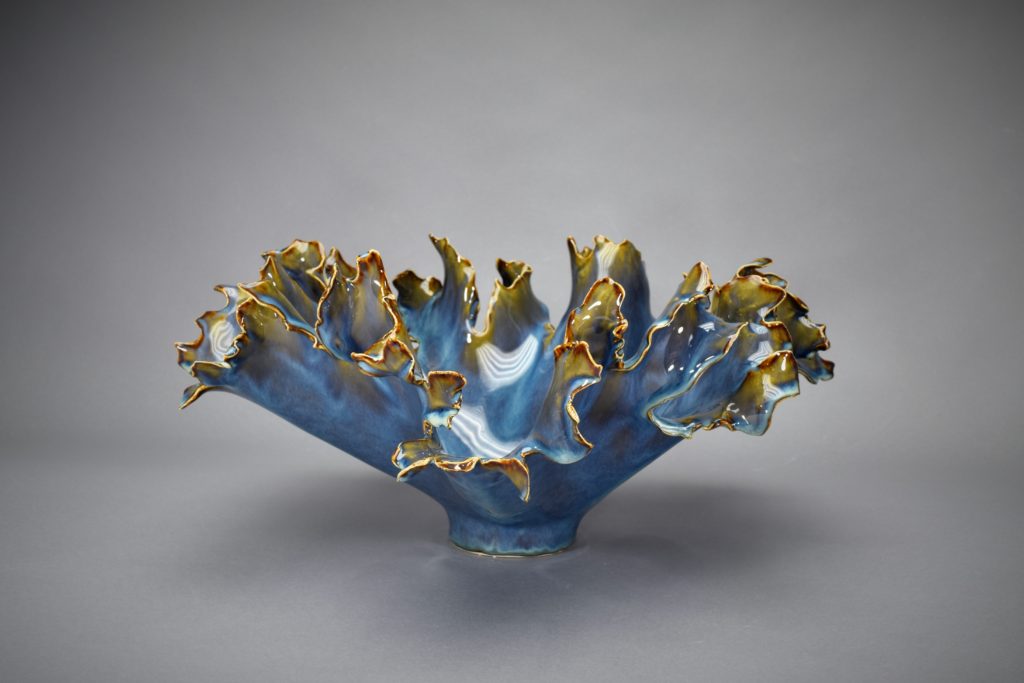 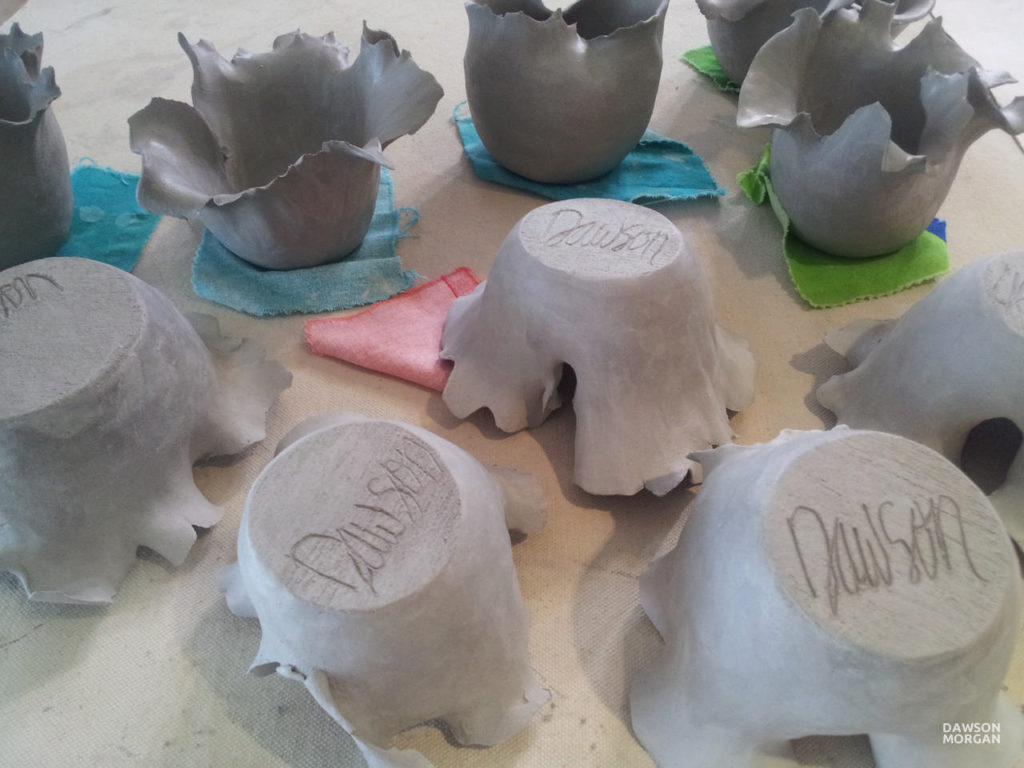 I am obsessed with natural color and texture in my ceramic creations. Hiking and collecting interesting sticks, leaves, and shapes seem to be my non artistic pastime.